Apple’s new Australian flagship store in Brisbane is gorgeous.
I like the effort Apple does to renovate old buildings, merging history with modern technology. I absolutely LOVE this desk. Minimalistic yet functional.
Want one! (and the loft sized office to fit everything in)

If you are involved in designing or developing websites, you probably already know Sitepoint. For those of you who want to be a better designer, Sitepoint released “The Principles of Beautiful Web Design” some time ago and it offers you 180 pages of basic site design.

In 5 sections, the book covers the most important aspects of a successful website design:

The following pictures are part of a highly recommended book review made by Travis King on freelanceswitch.com.

Having her in my weekly RSS feed, it was nice to see Veerle’s blog being mentioned in the book (screenshot on picture #2). For those of you who want to know more about designing websites, follow her weblog for more inspiration. The “Floater” is a vertical stand for the famous Apple MacBook Pro notebook.
Looks like a nice stand although US$ 305 is rather expensive, even for this design. Look at the specs at Balmuda design’s website. The review on Macworld.com will also give you a lot more information.

In their own words:

If you connect your notebook computer to a large screen, at work or home, Floater is designed for you. It combines high technology with elegant styling. Close your MacBook pro, connect a keyboard, a screen and a mouse, and you have created a perfect working environment.

If you are in walking around in London, you could be surprised when this bridge ‘goes up’. While most moving bridges go up the classical way, this ‘rolling bridge‘ does things a little different. How it works? This is what the website has to say:

Rather than a conventional opening bridge mechanism, consisting of a single rigid element that lifts to let boats pass, the Rolling Bridge gets out of the way by curling up until its two ends touch. While in its horizontal position, the bridge is a normal, inconspicuous steel and timber footbridge; fully open, it forms a circle on one bank of the water that bears little resemblance to its former self.

Twelve meters long, the bridge is made in eight steel and timber sections, and is made to curl by hydraulic rams set into the handrail between each section.

The bridge was designed by the London based Heatherwick Studio and won the 2005 British Structural Steel Award.

If you want to get your kids involved while cleaning the house, a traditional vacuum cleaner would not help you. A designer who did a thesis project for Philips developed the first vacuum cleaner that could be called “child friendly”.

More about the “Buster vacuum cleaner for kids” can be found at red.house. 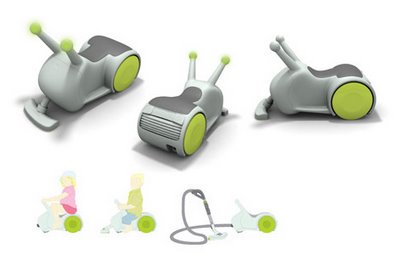